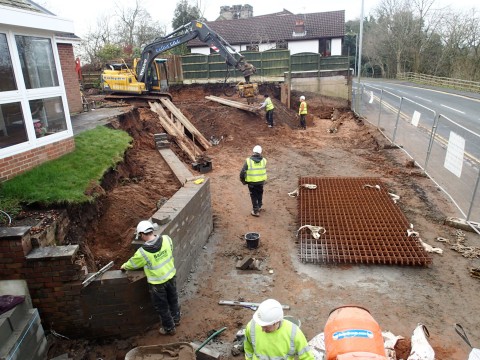 Why you Should Hire a Project Manager for your Building Project

Building projects are endlessly exciting: designing your dream space, planning the interior and seeing your […]

The confluence of the rivers Calder and Brun can be found in Burnley town centre, just off Active Way. Two large weirs had been constructed on both channels historically to power the cotton mills during the industrial revolution. Now redundant, the weirs posed an impassable barrier to migrating fish. During 2010 the Trust had worked on several weirs along the Calder to make them passable to fish, including a large one at Padiham. This confluence was the next major barrier to tackle.

Removal of these weirs was not a viable option due to the risk to the stability of buildings along the riverbank. Some buildings even form the riverbank. The decision was taken to place two identical fish passes into the weirs, and create a pool at the base with suitable depth for fish. Heavy rainfall and high flows during August and September set the completion date back by almost three weeks, however the end result was well worth the hard work that was put in.

As the work was being carried out, workmen reported sightings of trout below the weirs as well as a kingfisher. These fish passes, and the subsequent work planned for other weirs in Burnley as part of the Urban River Enhancement Scheme (URES), will give migrating fish access to the excellent habitat that exists above the town.